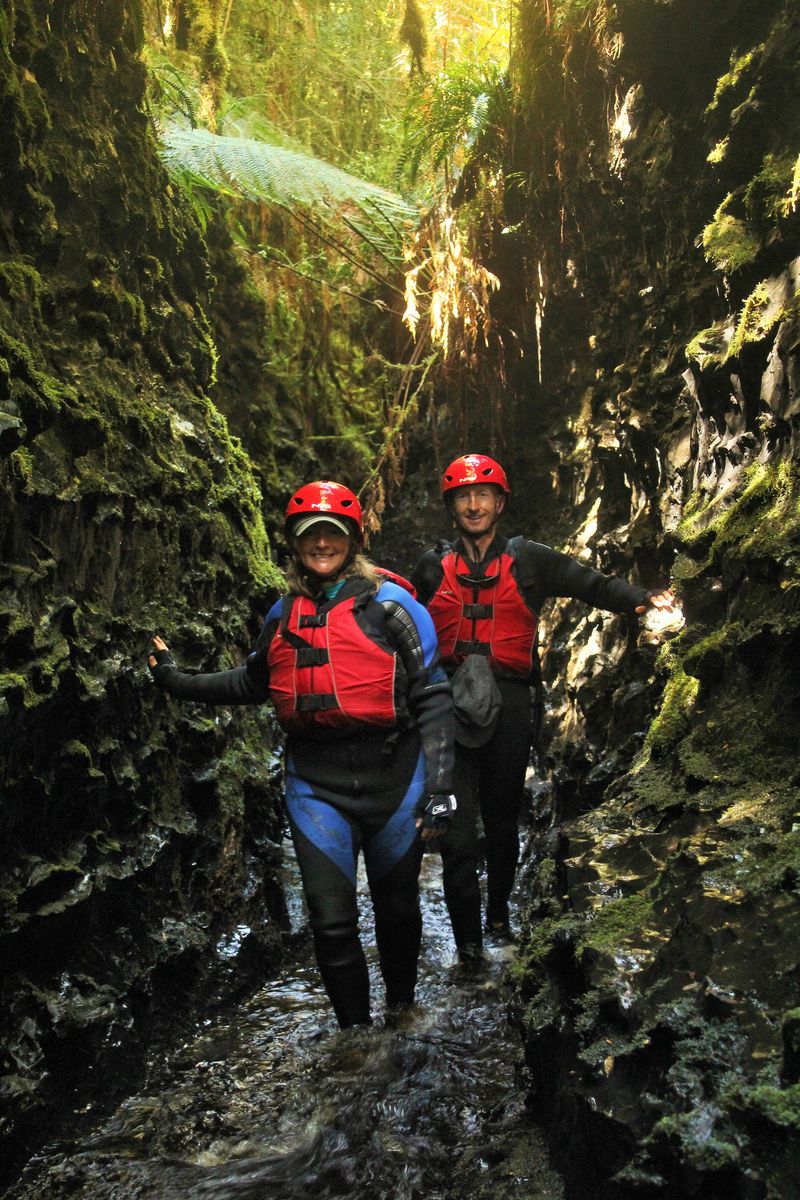 Originally written and published on the blog https://pashsheilaworldtour.wordpress.com:
RAFTING THE FRANKLIN RIVER – ARE WE MAD?
by pash44 on November 27, 2017
*Photo credit: Pash and Sheila

Pash and Sheila joined us on a 10-day Full Franklin River Rafting trip. For more information about a Franklin River rafting trip contact us on 1800-1111-42 or email on rafting@franklinriver.com.

History of the Franklin River

The Franklin River holds a special place in the hearts of many Tasmanians. It is the best-known of the rivers that run through the Wild Rivers National Park, in cool temperate rainforest and was at the heart of the largest conservation battle in Australian history, when environmentalists fought to save the river from being dammed. The issue dominated Tasmania’s political landscape through the 1970s and 1980s and led to one of the largest acts of civil disobedience ever seen in Australia.

A plan was hatched to produce hydro-electric power from the mighty Franklin but the strength of feeling from many Tasmanians led to a compromise plan to dam either the Franklin or the Gordon river. A referendum on which dam to build was held in 1981. The option of not proceeding was not part of the deal. 44% of Tasmanians spoiled their papers and wrote “NO DAM” on them.

The area was granted UNESCO World Heritage status in 1982 after the discovery of ancient Aboriginal cave sites at Kutikina on the Franklin. Investigations proved that the area was the most southerly human habitation in the world during the last Ice Age and one of the richest sources of archaeological artefacts ever found in Australia.

Despite this referendum result and the UNESCO World Heritage listing, work started on the dam’s construction. Protesters flocked to the river and formed a human blockade in small rubber rafts. 1272 people were arrested but as soon as protestors were removed, others took their places. Finally, legislation was passed forbidding construction work. This was appealed in the High Court but the Franklin River was saved by a 4-3 vote.

It is a very special place indeed and we became two of the small number of people each year lucky enough to travel its entire 110km length in a raft. This is true wilderness. You take in everything you need for the trip and you leave nothing behind. Nothing at all! It is one of the most dangerous rivers in the world. Water squeezes through narrow gorges at phenomenal rates and when swollen by rain, massive boulders and Huon pine trees are thrown down the river causing huge obstacles and big, testing rapids.

White water is classified into 6 grades. Most of the Franklin is 2-4 but in places, it’s 5 and 6. Grade 6 means it is unnavigable. If you can’t raft it, you take the raft out of the water and carry it around the obstacle. This is probably the most dangerous part of the whole trip. Many rafters, kayakers, even guides have died falling into rapids with names like Big Fall, Thunder Rush and The Cauldron. It is not a place to be taken lightly. It is absolutely beautiful.

We joined an expedition with Water By Nature, a company run by Brett Fernon, who has rafted the river over 450 times. Our guides were Eric Anderson and Blake Miller, veteran kayak and rafting guides at the tender ages of 28 and 23. Seven guests in 2 rafts, each weighing around 1 ton fully loaded. Not much rafting experience among us. We were all nervous and excited.

The water levels were good. Not too high (very dangerous, few places to camp), not too low (too much raft-carrying, very tiring and slow). The weather was awful though. It was raining and it was very cold. Single digits – yes in Australia! At night it was even colder. The water temperature was also very, very low. You did not want to fall in. In fact, you did not want to get any part of you wet. Small issue. When you get in the self-bailing raft, your feet are under water up to the ankles. When you go over a big drop, you go under water up to the neck if you’re sitting in the front of the raft. There were lots of big drops Pash sat in the front!

After 2 days of being cold and wet, we were exhausted and a bit crabby. The guides recognised the mood in the group and we had a day off, staying in camp out of the rain and going for walks up steep gorge sides. We never felt scared but we respected the power of the river.

>> A so-called camp site. Otherwise known as a damp cave!

The guides were AMAZING. Incredibly skillful, great man-managers, amazing chefs and brilliant on the water. We were in safe hands. It was the wet feet that were the problem!

The sun came out. We warmed up a bit and we probably toughened up a bit too. We wore an extra thermal layer inside our sleeping bags and we ate more. The food was ridiculous – fillet steak cooked medium-rare, deep-fried calamari, salmon sushi (with nori seaweed and sushi rice), wallaby bolognese, prawn curry, muffins with smashed avocado, bacon and fried eggs with coriander. Fresh herbs, marinades, chilli sauces. Totally ridiculous and absolutely bloody lovely – all the way through to Day 10.

We got better at putting up tents and tarps to keep camp dry. We paddled better. We could see the eddys in the river and we knew when to stop paddling and when to paddle hard. We got closer as a group as we shared the highs and lows. We were sharing something truly special.

We stopped counting how many more nights to go before a shower and a bed. We washed in the freezing river, not quite managing a swim! We all had an involuntary swim at one point or another when the river decided that we shouldn’t pass without feeling its full effects! We got stuck on rocks and found ourselves in rafts with more than 50% of the raft wedged underwater. But the guides leapt from raft to tiny rock and back and formulated an escape plan with total calm.

On Day 7 we had to say goodbye to the lovely John & Sue – a retired couple from Western Australia, who were great company. John is a sailor and saw himself as a potential rafting guide but about 40 years too late (his words). Sue was stoic, selfless and wore a permanent smile even when she had hurt herself quite badly a couple of times and/or taken involuntary swims. We walked with them up Mount McCall, a steep, muddy climb where we had to pull ourselves up on chains as we wanted to savour our last hours with them. We will see them again.

Before we knew it, we were at the end of the Franklin River. The guides roped the rafts together, pulled champagne from the cold water and then we paddled as one on the lower reaches of the Gordon River towards our final camp at Sir John Falls. A final meal, stories, jokes and a shared realisation that we had really achieved something. We had tested ourselves and we had gone way beyond our normal comfort levels.

At 6am, we woke to the sight of a 70ft yacht – Stormbreaker – that would take us out of the wilderness and back to reality after 6 hours sailing across Macquarie Harbour to the port of Strahan.

A final meal together with some beers in Hobart and we were back to civilisation. 3 days later, Eric and Blakey would start afresh at the top of the river. For them, normality in the wilderness.

Thank you Eric and Blakey for showing us your normal.